After coming back from holiday, it's time to get back into BIZ again. Its time to continue with my story telling session again! To continue with the SPAC Boom, 1 of my beloved lecture had give me a task by convince him that why should he invest in SPAC instead of those listed company which already has good track record and gives good dividend.


To answer this question, I would have to touch about the concept of investing as well as the risk profile.

Investing in company with good track record and dividend
1st. Investing in a company that already has good track record is because we know about the past of the company and we could evaluate the company whether is it worth to invest or not. On the other hand, this is a very safe strategy to invest as we knew the pattern of the management and the capability to make profit in future. As long as the company is still doing well hence they will create wealth to the shareholders which is also the ultimate role of the board. As a result, those investors who invested in this company will be quite safe and get good dividend while enjoying the value growth in the company.

This is a traditional way of investing which I would say its quite safe and able to create wealth in long run, and it has proven that its 1 of the most succesful trading method we've seen. The best example will be Warren Buffet as well as Cold Eye (冷眼）.

Investing in SPAC
SPAC, a new avenue for talented person to set up a company without going to those venture capital which will squeeze them. SPAC is usually the initial point of the company where they have an idea and get money from investor to realise their idea. At this juncture, the company is selling you a "dream" by promising you that they will acquire good oil field that generates certain percentage of return which will be the bread and butter in future.

As a result of the company has no track record, the money that you invested in is very risky as you have no idea whether will the dreams come true or not. Anyhow, thanks to Bursa Malaysia that tries to protect us by having such rules as refunding 90% of the cash proceed from IPO to the shareholders which that mitigate our risk from losing everything if the company fails to acquire any assets.. On the other hand, the investor who invested their money into the SPAC should no longer call them as Investor but Venture capitalist. This is because we are now taking over the position of the venture capital or private equity and invest in the newly listed company.

Due to the high risk of investing in those company that is at its start up point, the return is usually good when it succeed. According to National Venture Capital Association of USA, It is estimated that 40 percent of venture backed companies fail; 40 percent return moderate amounts of capital; and only 20 percent or less produce high returns. It is the small percentage of high return deals that are most responsible for the venture capital industry consistently performing above the public markets.

After the capital protection from SC, the risk that we are taking are much more lesser and you can sit there and enjoy the show that run by the talented person. But wait, how do we make money? Capital appreciation seems to be the main factor that drive us invest in SPAC and this will happen when we believe the company is able to acquire a good oil field that can produce tonnes of crude oil for us, the company will become a little Petronas that produce oil in future. Are we building castle in the air? Indeed, and that's how we make quick buck right? Without any valuation that proves the price is overvalued and this make the price go up sky high and it will go even higher when they strike their first drop of Crude oil.

To those who invested in SPAC, we are all venture capitalist that afford for risk, we are oil digger that hunger for black gold which will bring us huge return. To those that who still refuse to be part of us, U can still get rich just that the time frame of safe investment will usually be longer than those who take more risk. High Risk, High Return ma...

In short, SPAC is for high risk profiler!

As an investors, we should have a blend of agressive investment as well as conservative investment. As a result, SPAC is 1 of the best option for your risky investment!

U may be nervous that will it be too late to invest now, but let me explain to U that why is it not too late by now and what is my strategy for SPAC. On the other hand, I will share with U about CLIQ in the next part.

Last but not least, let me grab this opportunity to greet my Muslim friends and readers 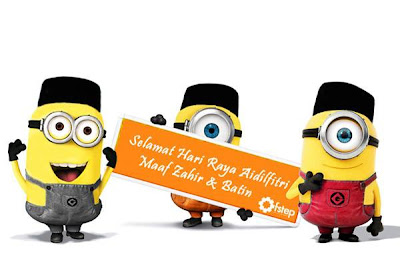 Have a nice holiday and enjoy your big day!

I have been vocal in AGM/EGMs of the first SPAC, Hibiscs Petroleum all these while - sharing my experiences dabbling in penny o&g stocks while studying at ANU, Canberra and at UBC, Vancouver, Canada. Those days I traded as a postgrad student on Sydney and Vancover Stock Exchanges. Have made some handsome $$$ when my stocks like Offshore Oil strike oil!
I am voicing/advancing my thoughts along similar lines as yours in my Kopitiam Talk series in my Facebook account (ArifinAbdul Latif) - do drop by and let's share this interesting phenomenon with fellow small timers.

Firstly Selamat Hari Raya to Arifin and happy hols to Loryau.. Am glad to read about interest in Spacs.. I have been investing in such shares since 2009.. FTSE Aim and Sydney..
It is high risk high return but you can mitigate the risk- e.g. - shun companies that have only one concession etc..
So far I have not reaped significant returns but have shares in 3 companies that have hit oil/gas.. One company has PMean of 13 billion bbls OIP Development Plan submitted so it will soon show reserves of about 3 to 5 billion bbls
on its Balance Sheet.... Its a long wait to reap rewards though..

Look forward to sharing and learning from all..

Hi Michael, would you mind to share what's the name of those company? I would like to do more studies on them. Thanks!

eToro is the ultimate forex broker for beginner and full-time traders.