EC had finally announced the election date which held on 9th May. Almost everyone around us had gear up for the election where most of the post in FB is regarding election.. So what does BCF think?

As an investor, we need to be alert with what’s happening around us but not being sway by the crowd. Most importantly, we have to be NEUTRAL all the time when it comes to investment.

As a result, we will have to be well prepared for all sorts of outcome and reap the most benefit from this election instead of joining the crowd to quarrel whether which party is better.

So which party do U think will win? Well, BCF believe that Party 1 and Party 2 stand a great chance, however, do not look down at Moonlight party, cause they can come n kacau at all places.. which will causes a split in vote that affect the results.. and we cannot underestimate their die hard supporters’ ability…

So… after taking out the possibility of Moonlight party to be the Govt, now we left with 2 parties… basically we can see lots of supporter for Ex-Boss party and there are lots of big waves saying this and that as well as Tsunami..

Anyway, we are not here to promote any party.. BCF just wanted to find some pocket money from the result of GE… hence..

Actually, our market were well supported above 1800 by our national team, and thanks to them, our index are not badly affected by the trade war. However, 2nd and 3rd liners are not that lucky where they are badly battered…

So let’s see what if…
1st candidate won the election… What will be the reaction?
Scenario 1.. by looking back at the election on 2013, I can still remember that lots of my friends are supporting the opposition, and more and more for this round. My friends were confident that the opposition will win the election and they sold all their shares as well as short sell the index.

However, the previous election was won by Boss Party and the index gap up almost 100 points on the 2nd day. As a result, all the shortist got shock as well as the dealers too.. because this is the very 1st time that the account holders lose all their deposits in a millisecond, and they still have to top up around 10k+ per contract. The chart below shows the performance of KLCI after election.

Can u feel the shortist now?
Will History repeat again? I believe those investors that are holding shares might be quite hard to make decision whether to pray for stock market to rocket or pray for Ex-Boss party.

BCF believe that if the global trade war settle down before election then its quite possible that we can have post-election rally. Of course, we hope the 2nd and 3rd liners can perform like how it does in 2013 so that we can catch some fishes. 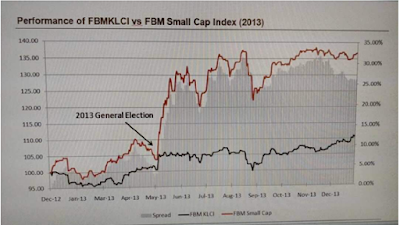 Why do we think that there will be a post-election rally? This is because a lot of investor as well as institutional investors are risk averse where they will try to avoid election risk. As a result, they will sell prior to election and buy back after the dust settled. Hence, it is possible for them to re-enter the market after the election. Anyway, this will still depends on the global sentiment by that time, things won’t happen if global market are crashing.

Scenario 2
Anyway, we can’t be too optimistic as well because China and US still not settle with their trade war and we need their permission to let our stock flyyyyyyyyyyyyy! So we have to pray hard that they grant us the permission to fly!

Scenario 3
Post-Election rally might not happen and we will need national team to support the index!

Anddddd the following will be.. What will happen to the stock market if Ex-boss come back to kick some ASS party wins! I know, that’s what most of the readers love the most, however, Im just analysing what I think is true… pls don’t throw egg or rotten tomato to us.. we welcome u to throw us money.. I repeat, money only…

Scenario 1
Previously, there is a party led by CD says that, we want stability! Well, he is right because there will be lots of uncertainties. On the other hand, the Ex boss said that he would review the investment from China, this is not a bad thing however, this would causes fear between foreign investors. This uncertainty is what foreign investors fear the most, and they will not pour money in until everything is settled. As a result, there will not be any post-election rally, and we have to be grateful if the index manage to stabilise above 1800 points..

Some Ex-boss supporters will say that, then it’s the best time to short market! Well, we would not deny that, and u might be able to make big money from that. However, we would like to remind u the lesson in 2013 and please manage ur risk, or else, its not only the party u love will lose but u might get double kill as well!

Scenario 2
There is another possibility where the index rocket after Ex-boss party won the election which almost alike Trump’s case and index hit historical high. However, this would be the best case scenario for Ex-boss’s supporter, but we believe the possibility of it happening is quite low.

After all, we would like to clarify that we are not bias or taking side towards any party, but we are here to see what might happen next and be prepare for what’s going to happen soon. Most importantly, we can be the real winner for the election instead of those political party.
What’s your take after seeing all the possibilities? What will be your strategy? Every strategies have its risk, hence, Big Canon would like to remind you to control your risk.

We will share with our readers whether what stock to monitor base on the possible outcome.

Big Canon need your support to motivate us, hence, do help us to Like and share our article. Thanks and happy investing.