Valuecap: Return of the KING, Can they succeed?

The recent plunge had caused the government to put lots of effort to stabilise the market where Valuecap is 1 of the most eye catching measure where our PM announced reactivating Valuecap by pumping in RM20b which is the highest amount ever.

Valuecap were 1st announced in October 2002 where it was after the 911 of 2001, and in the middle of SARs as well as before the war in IRAQ which started on 20th March.

Government set up Valuecap at that time where the capital will be RM10b which is from 3 of its shareholder Khazanah, PNB and KWAP.
In year 2003, Valuecap had raise RM5.1b through issuing bond. Money raise were injected into the market. Though government had announced RM10b, however the fund end up using only RM5.1b to stabilise the market. 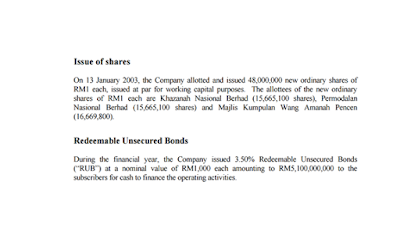 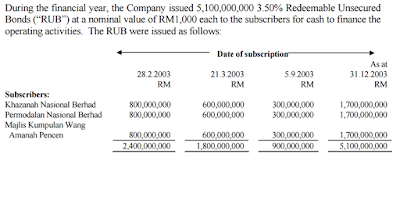 From the data above, we can see that the money of Valuecap doesn’t come in a shot, but it is divided to a few shot. Where the Valuecap got RM2.4b on 28th Ferbruary, RM1.8b on 21 March and another RM0.9b on 5th September. We believe they can only go into share market after they got the money from RUB.

Summary: The government had successfully support the market in year 2003 by using Valuecap which spent only RM5.1b which is smaller than what they budget.

The second appearance of Valuecap

In December 2007 where the Subrime loan Crisis from US happen while the collapse of Lehman Brothers on 15th September had causes the market in great fear. The market had collapse where it started to fall on its historical high of 1513 to the lowest by 801 which had dropped 712 points or 47.05%.

In year 20th October 2008, Deputy Prime Minister and Finance Minister Datuk Seri Najib Razak announced that the government would inject RM5 billion from the Employees Provident Fund (EPF) to double the size of the highly-secretive government fund, ValueCap Sdn Bhd to RM10 billion to prop up the stock market. 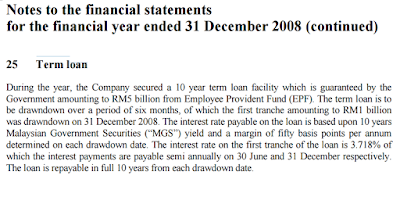 However, in year 2008’s Annual report it shows that the ValueCap had only got RM1b from EPF. Above is the terms of the term loan. 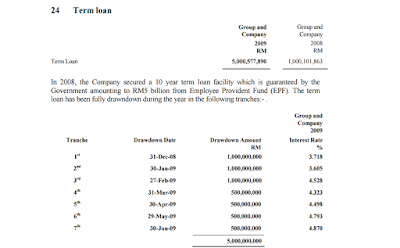 The remaining amount of funds were received on the date above. we believe they can only go into share market after they got the money from EPF.

In year 20th October 2008, DPM Najib announced to pump RM5b from EPF to Valuecap, however, ValueCap only got RM1b in year 2008. Though they haven’t use the fund, but the index had started to sideway after then.

It is worth noticing that the FED had also announce QE on Dec 2008 which we believe that is also 1 of the reason that helps to support the market to come back from falling. 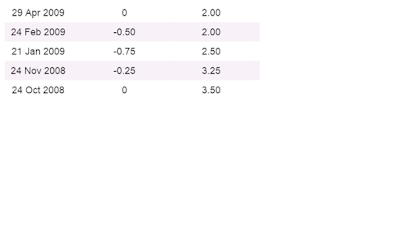 On the other hand, BNM is also slashing interest rate at that time where it had slashed 1.5% within 3 months frame which is a very drastic measure.

The thick red line were the date that Valuecap get funds from EPF, we can see that the market didn’t rise even Valuecap get the funds however, the market had stop dropping after Valuecap cames in which we believe this is an important factor that buoyed the index.

The result of Valuecap on 2009

Summary: Though the government had launched the Valuecap to support the market, however the return of the market was not solely due to Valuecap but it was result from the combination of Monetary Easing measurement of BNM as well as Quantitative Easing from US.

As a result, PM had announced to reactivate Valuecap by injecting RM20b into the fund on 14th Sept 2015.

we have sum up all the details of the previous years to make a comparison of the differences.

After doing some comparison, we found that the government introduced Valuecap in 2002 after the stock market dropping 24.63% while they had used RM5.1b instead of RM10b which they announced earlier. In 2008, the stock market had tumbled 47.05% before the government announced pumping RM5b into the Valuecap. However, in 2015 the government had announced reactivation of Valuecap with RM20b after the market drop 20.72%, where the amount this time is much larger than the previous and they roll out this measure even the market is still dropping lesser than the previous one.

Other than comparing the percentage of dropping for Malaysia, we can also take DJIA as comparison where DJIA had dropped 27.94% and 31.11% in the past while this time they were only dropping 16.24% which is still below 20% and hasn’t enter the bear market yet. This shows that the government had roll out this measurement pretty early.

On the other hand, we can also noticed that Valuecap doesn’t pump money into the share market by 1 shot but they are divided to a few bullets. However, Valuecap doesn’t help to push up the market once they pump the money in but they do able to stabilise the market from dropping.

This is proven in the news “State-owned investor ValueCap Sdn Bhd is expected to start a mopping up spree of underperforming stocks on Bursa Malaysia from November, when its shareholders release the first tranche of its announced RM20 billion fund.
ValueCap’s three shareholders — Khazanah Nasional Bhd, Retirement Fund Inc (KWAP) and Permodalan Nasional Bhd (PNB) — are expected to make available RM8 billion as part of the initiative to strengthen the economy that was announced by the prime minister last month.
KWAP CEO Wan Kamaruzaman Wan Ahmad said the three shareholders will each provide an equal RM6.67 billion to ValueCap’s kitty.
“We were given an aggressive deadline of Oct 15 (to start), but we think it will be difficult due to regulatory steps and approvals as well as the nod from each shareholder’s board.
“We estimate ValueCap to commence with funds available somewhere in the second-half of November,” he told The Malaysian Reserve at the sidelines of the Khazanah Megatrends Forum 2015 yesterday.”
Source: http://themalaysianreserve.com/new/story/valuecap-share-buy-%E2%80%98spree%E2%80%99-starts-november

From the information above, we can see that the Valuecap came out for the 1st time when George Bush started to query Iraq regarding the massive destructive weapon and followed by Iraq war and SARS which had affected the share market. However, the market had started to come back after the commencement of Iraq war on June 2003 where DJIA had also rose by 26.19% in 1 year time. Hence the rose of FBMKLCI was contributed by 3 things, 1st is the Valuecap, 2nd is the commencement of war which had removed the uncertainties and the 3rd is the comeback of DJIA. These 3 major factor was the most significant reason that causes the market to regains its pace.
Source：https://en.wikipedia.org/wiki/Iraq_War#The_invasion

The 2nd time is in 2008 which were caused by Subprime loan Crisis as well as the collapse of Lehman brothers that resulted in financial market turmoil. Our Government had rolled out RM5b for Valuecap while BNM came out with Monetary easing measurement by slashing interest rate from 3.5% to 2% as well as Quantitative Easing (QE) by FEDs which had causes the US market to regain its pace. These 4 issues were the main reason that causes our share market to comeback.

In 2015 which is the 3rd time, our country had faces a drop in income due to the low commodities price, the slowdown of china and the uncertainty from Europe, US tightening their monetary policy by rising interest as well as the fall of EM currency. Our government are smart enough as they are aware of the severity of these issue hence they had come out with RM20b to reactivate Valuecap.

However, we don’t have other factors that help us to buoy the market other than Valuecap, it will be an uphill battle for Valuecap as long as the issue that bothering us which we mentioned above still remain the same.

It will only be easier if BNM ease their monetary policy, commodities price able to rise again, China able to avoid hard landing as well as the DJIA able to make new high again, or else, it is not an easy job to Valuecap.

So how shall we benefit from it?

Last but not least, as Valuecap is coming back to save the market we can still look for some “undervalue counters” such as FGV (don’t think undervalue but its cronies counters), MHB (don’t think undervalue but its cronies counters) to make some quick bucks once Valuecap came in. On the other hand, those really undervalue counters that I think might spark the attention of the Fund managers might be Padini and Tunepro which is consider cheap now.

In short, My top pick now is FGV, MHB, Padini and Tunepro which might be favourable to benefit on the Valuecap move. Btw, u may look forward for my next post about Leesk which doesn’t drop much even their profit fall in the past quarter, this might be a hidden gem that waiting to explode soon.

Will the government inject 20 billions in the coming share market?I doubt about it.Cos they are great kaki bohong.I just pray ppl like us wont get 'wounded"

eToro is the #1 forex broker for beginner and professional traders.