Sarawak Election stocks (Part 6) Which is the next after CMSB?

Which is the next after CMSB?

In the past week we saw more and more news about the Sarawak Elections as well as the Pan Borneo highway, before we moved on to tell you about the next after CMSB, let us make some recap about the things we mentioned about 1 month ago.

On 7th March, we mentioned about the Sarawak election and the candies effect as well as the Pan Borneo highway and we mentioned 3 counters CMSB, HSL and NAIM where we opt for CMSB-CJ and HSL-CC. Where CMSB were RM4.19, HSL were RM 1.78 while CMSB-CJ were RM0.095 while HSL-CC were RM0.07.
(We've saw more and more news portal talking about this, be it The Edge, FocusM, NanYang, SinChew, or even some private share info portal)
http://bigcanon.blogspot.com/2015/03/sarawak-election-stocks-part-1.html


On 10th March, CMSB started to rose and close RM4.43 where we pointed out the big fish are eating the tix.
http://bigcanon.blogspot.com/2015/03/sarawak-election-stocks-part-2.html


On 15th March we shared about HSL
http://bigcanon.blogspot.com/2015/03/sarawak-election-stocks-part-3.html


On 16th March we shared about the CM of Sarawak and Sabah met each others.
http://bigcanon.blogspot.com/2015/03/sarawak-election-stocks-part-4.html


On 22nd March, we shared that The Edge Weekly had published news about the Pan Borneo Higway
http://bigcanon.blogspot.com/2015/03/sarawak-election-stocks-part-5.html

While on our facebook pages, we have shared lots of info about the highway and we even hinted the day the highway will be officiated. 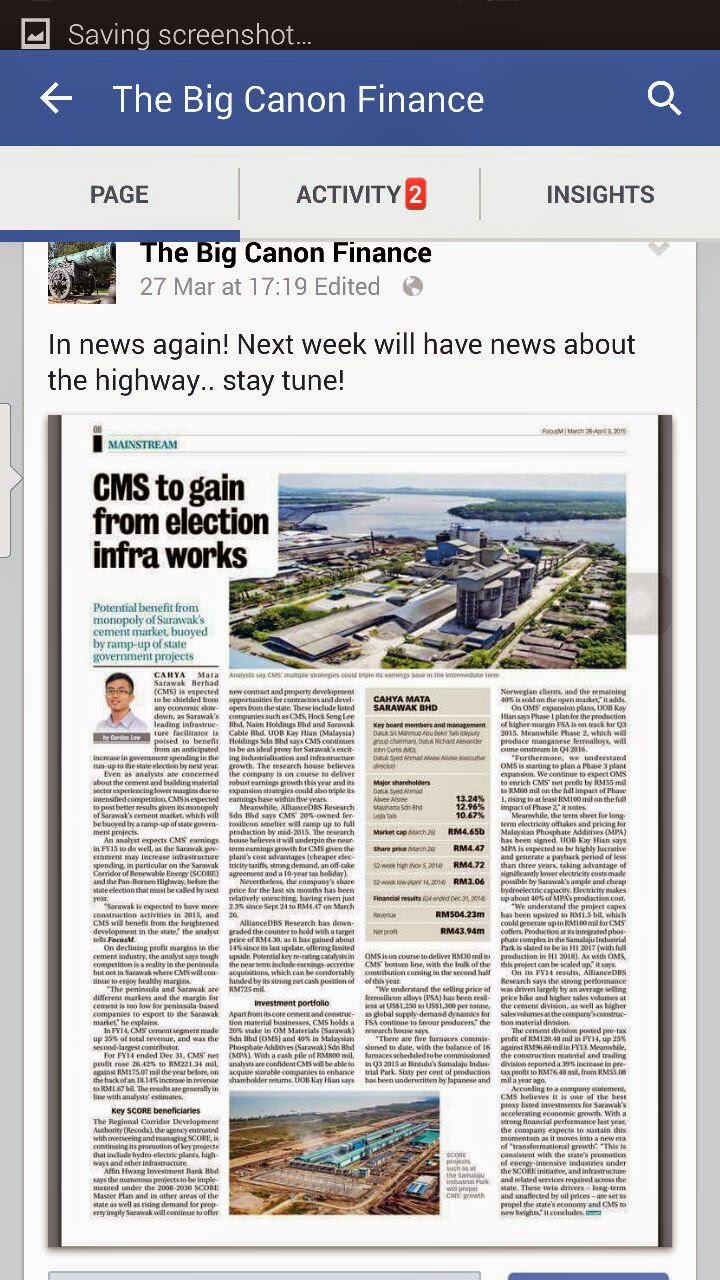 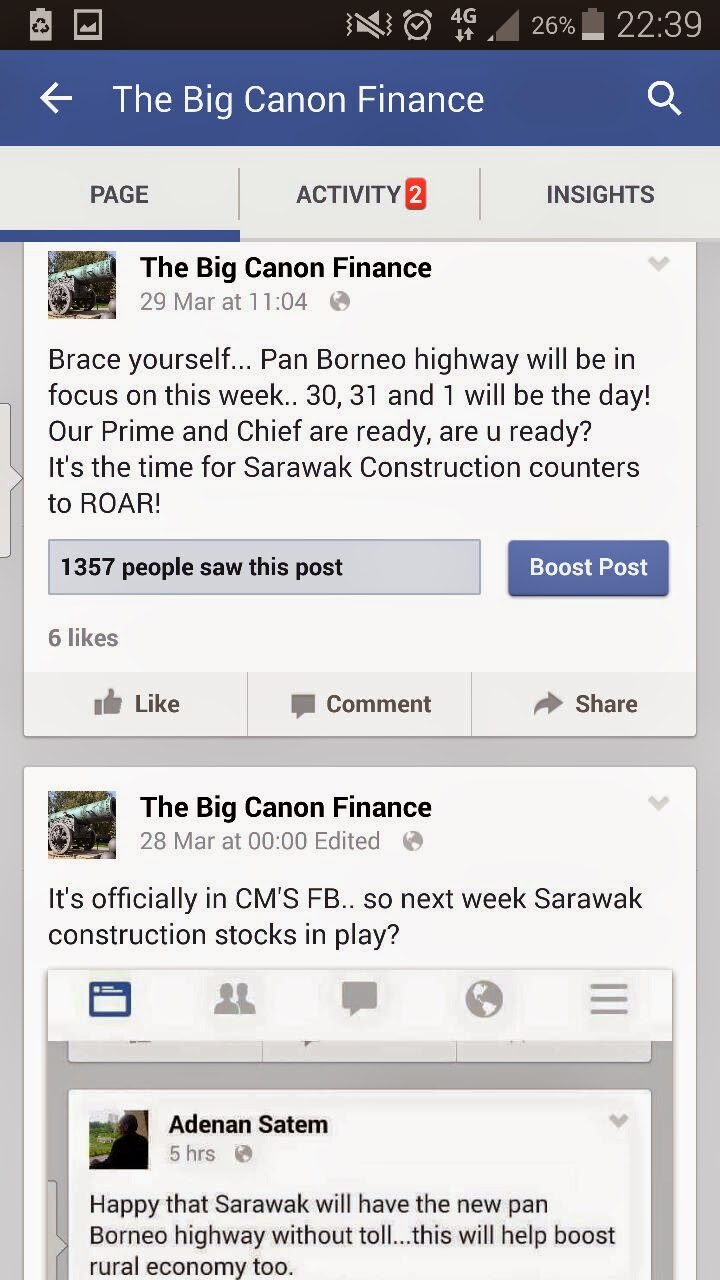 On 29th March, we have hinted. 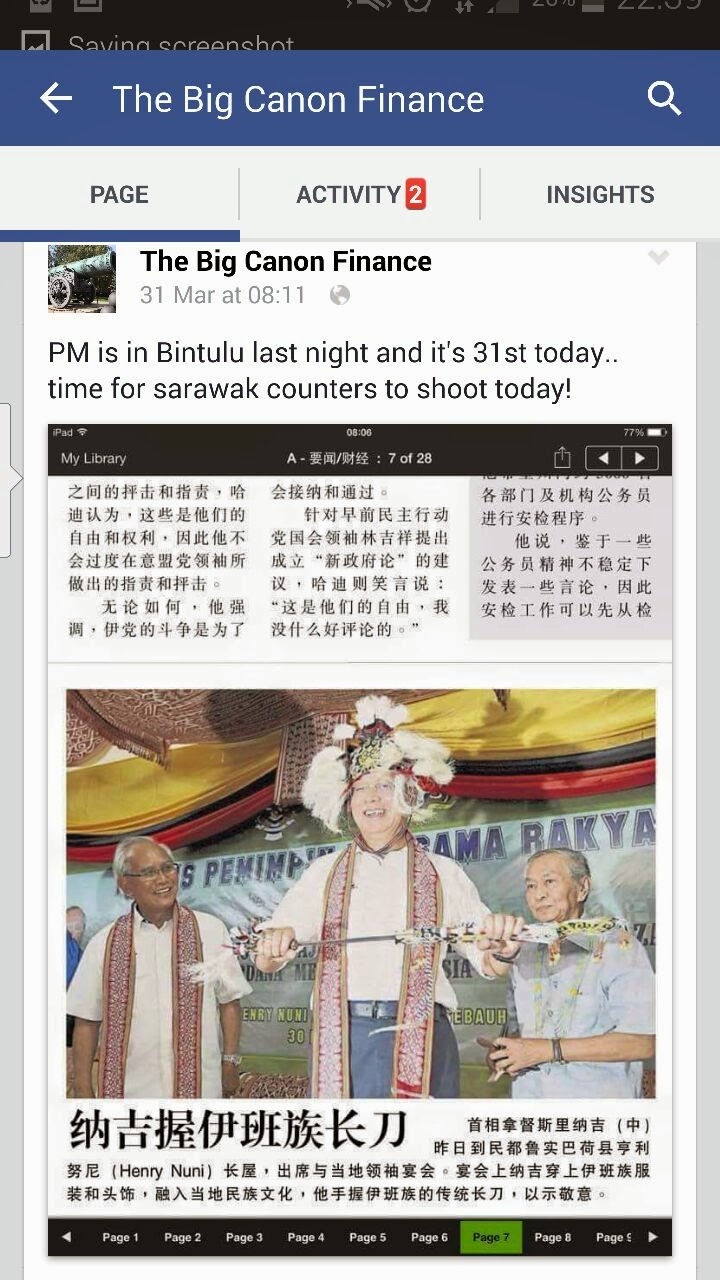 On 31st morning, we've reminded you that PM is already in Bintulu, Sarawak. 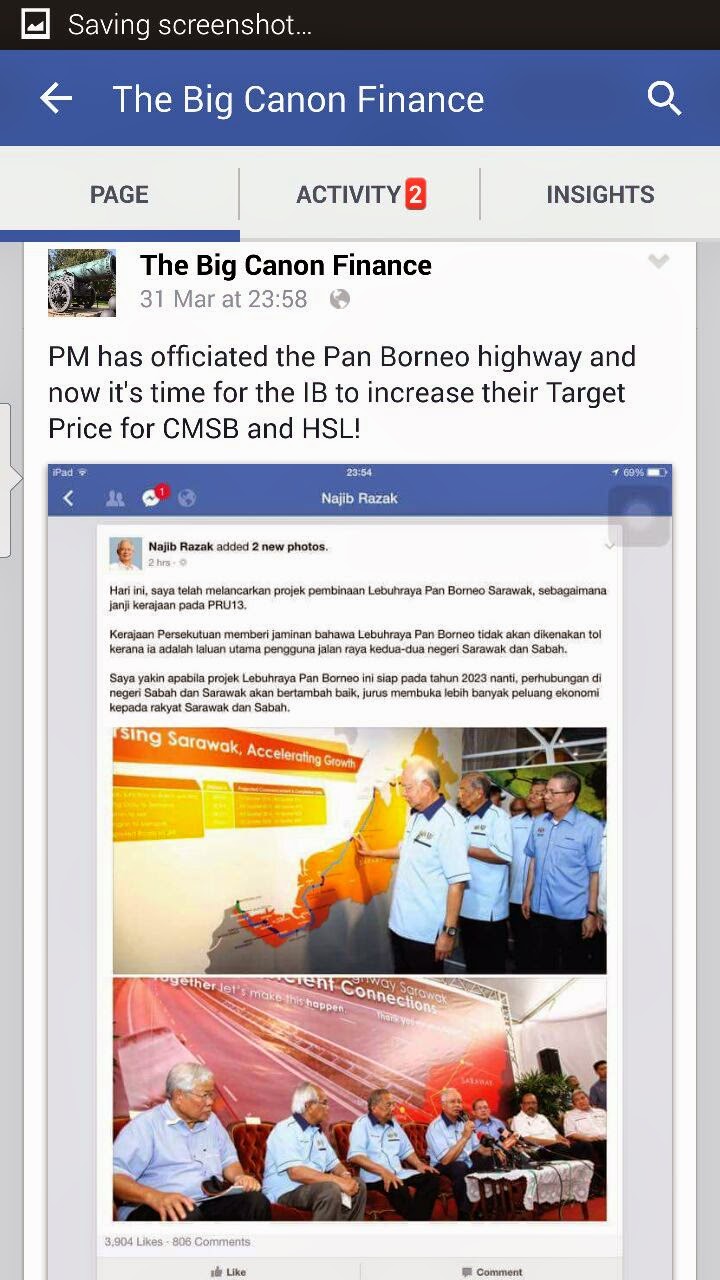 On the night of 31st, we saw news about our PM officiated the highway. 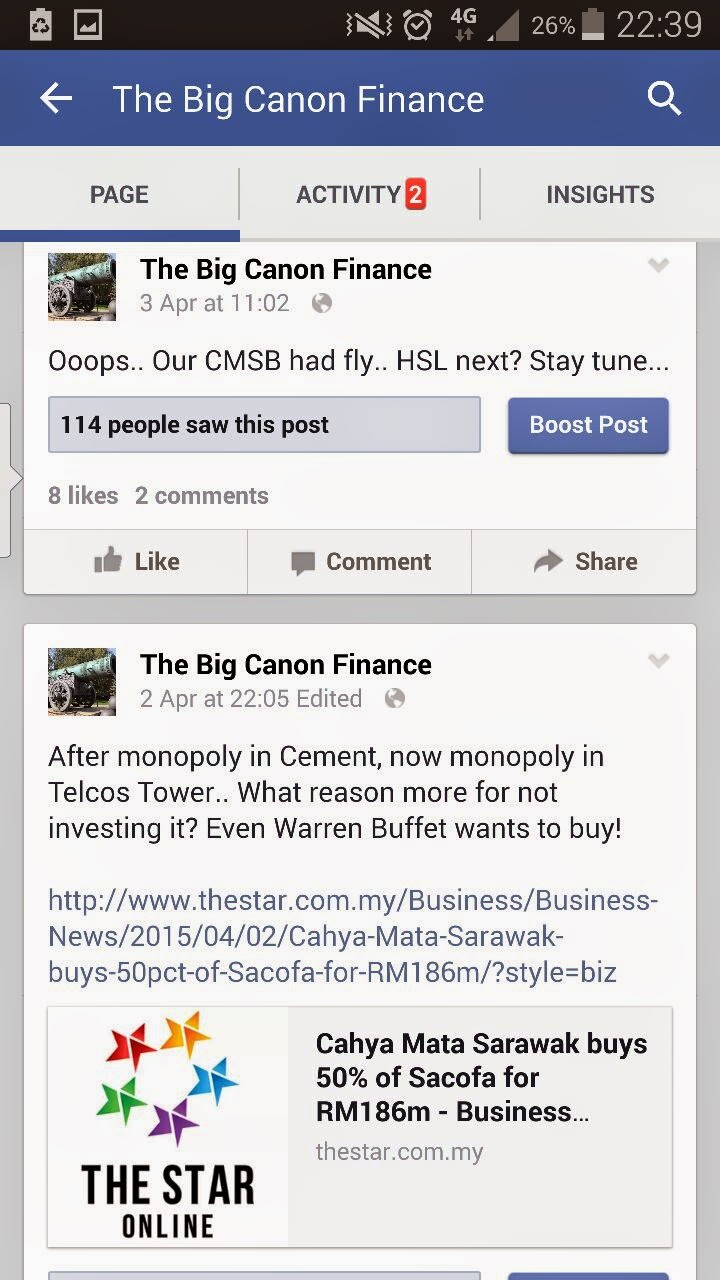 To those who havent like our page, you may do so at the link below:
https://www.facebook.com/bigcanonfinance

So CMSB had hit is historical high last week and it closed at RM4.70 while CMSB-CJ is closing at RM0.13 (almost 50%) already, and is this the end? Nope, I will say this is only the begining. Look at what were reported on The Edge Weekly this week! 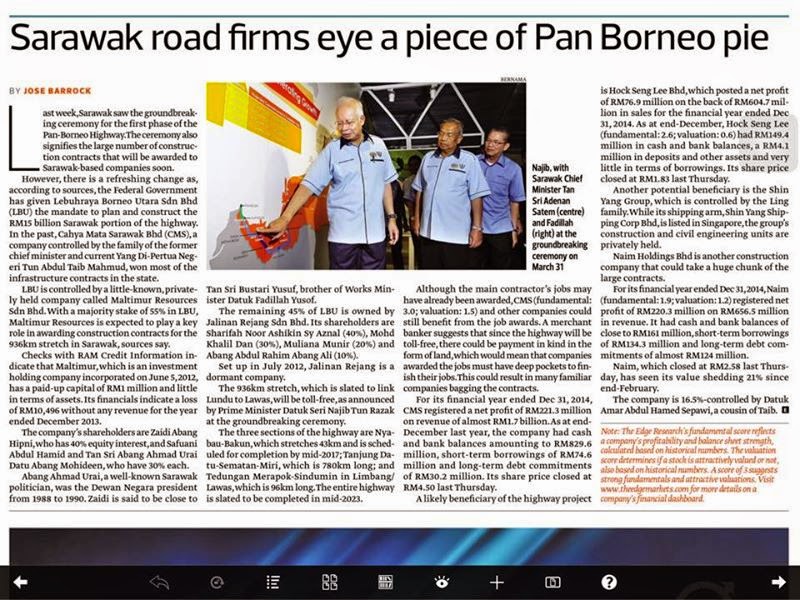 The Edge had mentioned CMSB, HSL and Naim on 5th April 2015 just like what we did on 7th March where we are 1 month earlier!

Anyway, we have saw the 1st company who get the project were Prtasco.
http://www.theedgemarkets.com/my/article/protasco-bags-rm58m-road-job
Its quite surprising to us but far as we know, the others counters that we mentioned were not affected by the project given to Prtasco as this project is a big cake to be divided to all the players.

On the other hand, The Stars had a very interesting articles that its title is

Will this be the case? I think the possibility is high as Tan Sri is very popular now where even the chinese voters fall for him.. If thats the case, seems like the candies will be distributed very very soon..

As we mentioned above and before, HSL and Naim still will be the winner however we like HSL more as  the chart of HSL is indicating a upward bias trend as well as waiting for break out while the chart of NAIM is on down trend as the share were hammered badly by its subsidiary Dayang which were draged by the weak oil price.

On the other hand, there are something big that is coming its way to HSL... Will it be the Election candies?

We've been sharing our thoughts correctly in the past month and now lets sit tight and wait for the good news!

Last but not least, I would like to quote a sentence from Elon Musk (the owner of Tesla):
"I can either watch it happen, or I can participate and help it happen."

eToro is the #1 forex broker for beginner and advanced traders.