71.43% that the Japanese Nikkei gonna have massive correction!

A few days ago Michael Cembalest whom is Global Head of Investment Strategy in J.P. Morgan had did some research about Nikkei regarding their sharp rising from 9000 points in November 2012 til 15600points in May 2013 which is also 73.33% increment within half year and I would share some points that he pointed out there. 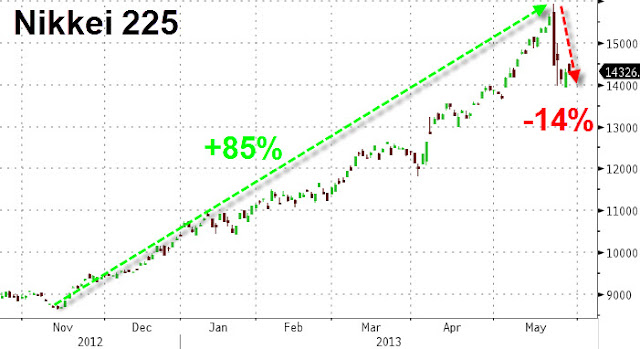 How much optimism was priced into the success of Japan’s monetary policy bazooka? As JPMorgan's Michael Cembalest notes, P/E multiples rose from 11x to 17x since last Labor Day, and breakeven inflation implied by (admittedly thin) Japanese JGB-i bond markets rose to 2%, a level Japan has not seen consistently since 1990. On top of that, net long positions on the Tokyo Stock exchange were close to the highest levels in 20 years, and foreign participation in Japanese equity markets was also elevated. It did not take much detailed market research to see that Japan had become a crowded and popular trade.
But what happens next? After a 70% run-up over 6 months, how have stocks performed? The answer may surprise many... 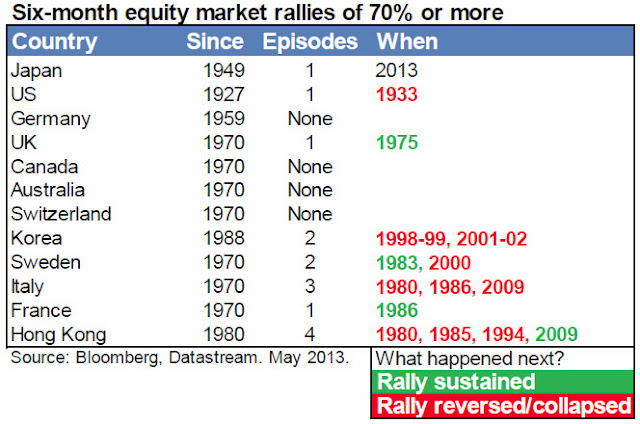 Some may find that this is superstitious but what I could say is " The history will repeat itself." As a result, this is another point that again shows that we should sell stock now as the market in Malaysia wouldn't be good if U.S and Japan and even our ASEAN market is not doing well.

I'm so sorry for Abe even I think the Abenomics gonna work this time, but this correction really gonna affect his plan. So as an investor, what is your next move?

eToro is the #1 forex broker for beginner and professional traders.